LNG Terminal Paves the Way for the Energy Transition

The first is an ammonia import terminal, which will deliver large quantities of green hydrogen to Germany via Wilhelmshaven in the form of ammonia from sunny regions around the globe. This project is planned for the second half of the decade. The second project is an electrolyzer with a capacity of up to 1000 MW, which will produce hydrogen from offshore wind energy.

The LNG terminal was planned a few years ago, but it could not be implemented as a commercial project at that time and Uniper continued to focus on other green projects. Russia's war of aggression against Ukraine made it necessary to further diversify sources of imports and required a rapid response from the German government, resulting in plans being restarted and intensive work being carried out. This means that the project will be completed in less than a year, despite original plans estimating five years. This was made possible by the LNG Acceleration Act, which came into force on June 1, 2022, but also because the import terminal does not need to be built from scratch and an existing ship will be used as an FSRU (floating storage and regasification unit) in Wilhelmshaven. The vessel has traveled across the world's oceans for the last four years and has now undergone early maintenance and necessary modifications in Brest.

The FSRU will be based at Wilhelmshaven, where it will be based for the next 10 years and become operational around the turn of the year. "In the near future, up to 8% of Germany’s gas demand before the war can be met by the terminal in up to 70 LNG tankers a year. Each vessel can transport 170,000 m³ of liquefied gas and thereby supply 50,000–90,000 German households," says Holger Kreetz, COO Asset Management at Uniper.

While the LNG project will be completed this year, the ammonia import terminal and the electrolyzer—which is to be built at the current power plant site—are still in the planning phase. The three major energy projects are being carried out in parallel by different teams. "The LNG terminal has not put everything else on hold; instead, it will provide even greater momentum to future projects," says Kreetz. "In fact, the terminal is creating synergies since the infrastructure in Wilhelmshaven can be used for LNG and hydrogen," he continues.

For example, the pipeline from OGE (Open Grid Europe) spanning 26 km is H2-ready, meaning that in the future a proportion of hydrogen can be mixed into natural gas or pure hydrogen can be transported. Until now, Wilhelmshaven has not been connected to the European high-pressure gas network. The current LNG project now provides this connection and thereby paves the way to a hydrogen economy. "Our main focus is not on short-term LNG — this is simply to ensure Germany's security of supply. Our vision is to build a bridge to a decarbonized hydrogen world. The LNG terminal puts Uniper in an ideal position to achieve this goal, not only because of its synergies and infrastructure, but also because it demonstrates that we can implement a comparable project in a very short time," explains Holger Kreetz.

This blog piece is part of the series on Uniper’s activities in Wilhelmshaven and surroundings to support the transition towards hydrogen. 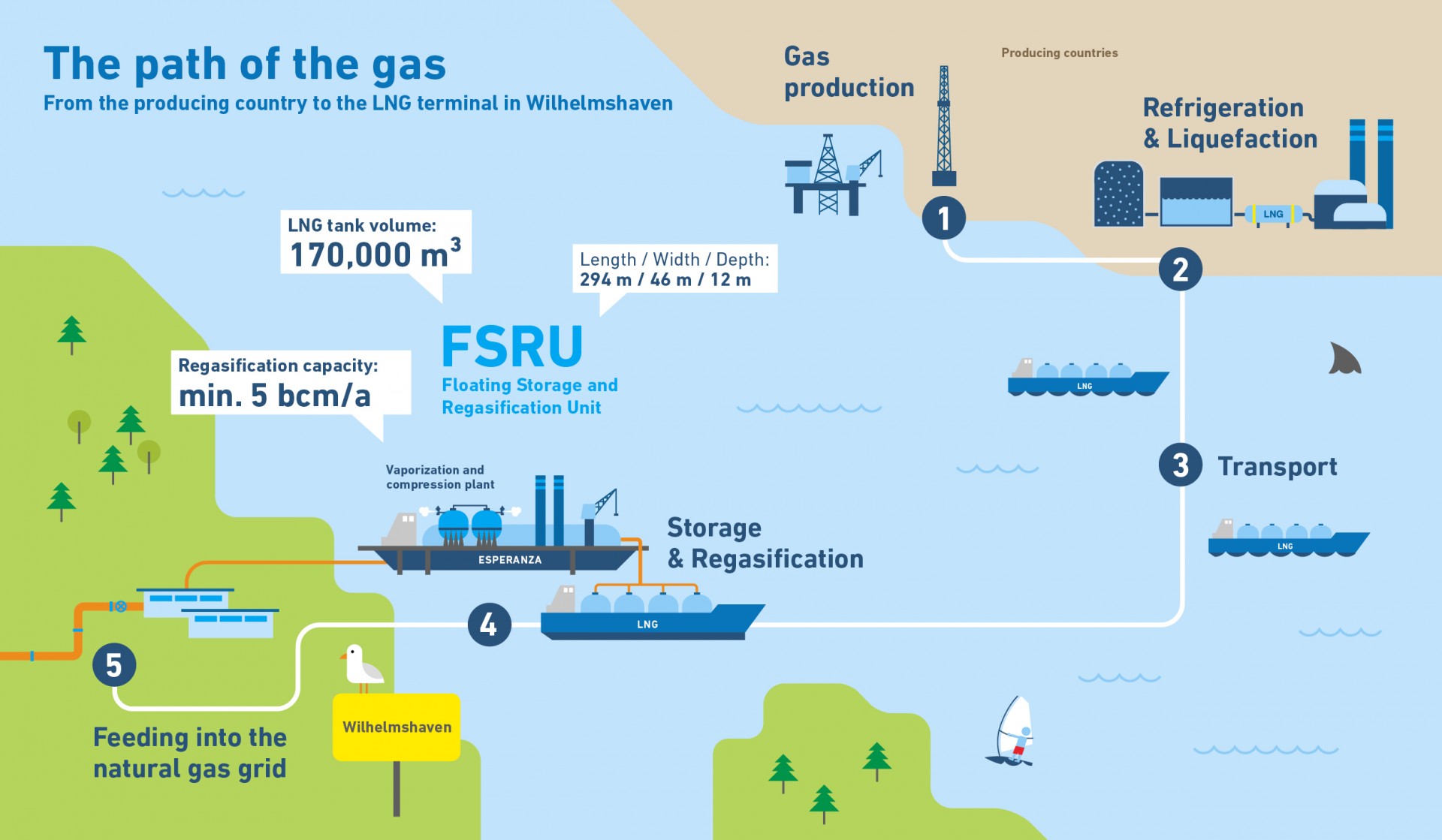 LNG-Terminal Wilhelmshaven_Infografik EN
Comments (0)
Thank you for your message. It will be posted after approval.

LNG Terminal Paves the Way for the Energy Transition