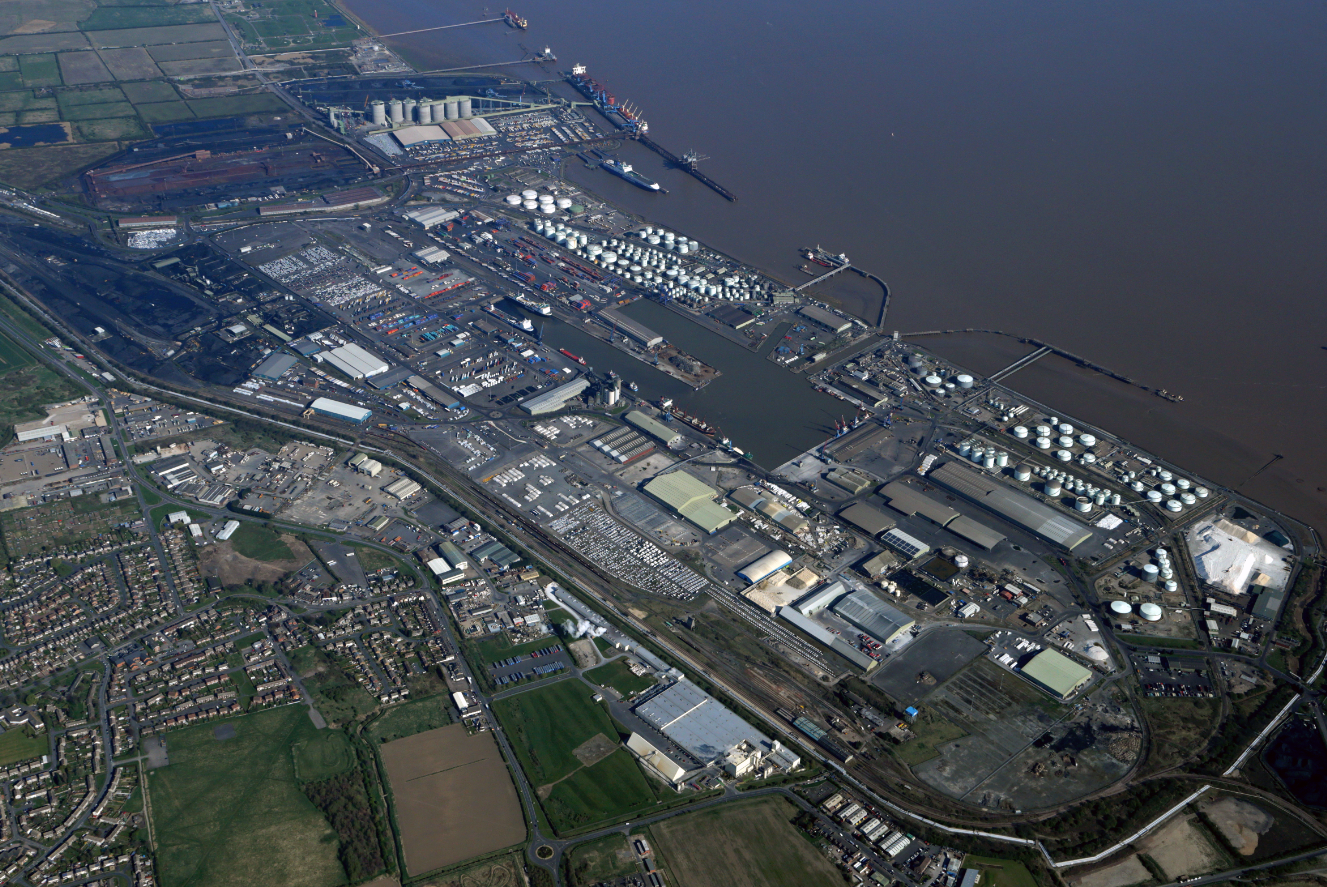 Uniper, Siemens Energy, Toyota Tsusho and Associated British Ports have submitted a joint bid into the Clean Maritime Fund for matched funding to develop their vision for a low carbon hydrogen supply to the Port of Immingham.

A joint study completed by the four companies shows that the availability of low carbon fuels in ports, such as green hydrogen, can provide a viable opportunity to decarbonise ‘hard to reach sectors’, such as maritime and cargo handling.

ABP’s Port of Immingham, located within the Humber industrial cluster, is the UK’s largest port by tonnage, handling over 54Mt of cargo annually. The port is ideally placed to take advantage of the existing infrastructure in the region, combined with technical expertise brought by the four partners. There is the potential for green hydrogen to be produced by electrolysis, using a renewable energy supply such as offshore wind. The hydrogen could then be used as a direct replacement to diesel and heavy fuel oil, or for the production of clean shipping fuels.

The funding bid has been submitted so that the companies can undertake a full feasibility study for this exciting project. The study would review the technical and economic feasibility of reducing port greenhouse gas emissions with hydrogen, and develop a clear plan for future development. A successful funding bid could allow this work to begin as early as September 2021.

The project aims to develop a scalable decarbonisation solution within the Port of Immingham, which, if successful, would be replicable in other ports. Ultimately this could be the first step in the uptake of hydrogen as an alternative to fossil fuels across the whole maritime sector.

The project could lead to an initial c.20MW supply of green hydrogen to the Port of Immingham by 2025.

Uniper brings its existing expertise in the field of hydrogen production to the project and will lead the feasibility study. Uniper owns the nearby Killingholme power station, which if the bid is successful, could be one of the locations for an electrolyser, powered by renewable energy, to produce hydrogen for the port.

Siemens Energy currently produces some of the worlds most advanced PEM electrolysis units and has an aspiration to be a key player in the UK market, complementing its current products in the renewable sector. Siemens Energy has identified the Humber as a key area to decarbonise in the UK.

ABP’s Port of Immingham is a major trading gateway and intermodal hub for road, rail and sea transport, making it the ideal location for hydrogen production and distribution. The project demonstrates the critical role ports can play in building sustainable supply chains and accelerating the decarbonisation of the UK’s economy.

Toyota Tsusho UK will carry out an assessment of the conversion, replacement or retrofitting of port equipment, as well as hydrogen refuelling infrastructure and potential achievable GHG reductions.

Mike Lockett, Uniper UK Country Chairman and Group Chief Commercial Officer Power, commented: “ This first of its kind concept, has the potential to become a decarbonisation solution not just for the Port of Immingham, but for other ports, and the maritime sector as a whole. Uniper, working together with our partners, is committed to using its knowledge and expertise in the field of hydrogen to provide solutions for sectors that are difficult to decarbonise with electricity, such as aviation, shipping, and industry.”

Steve Scrimshaw, Vice President UK&I, Siemens Energy Ltd, said: “Reaching net zero is going to require a fundamental change to our day-to-day lives, and the energy industry will play a vital role in innovating to find cleaner alternatives to decarbonise industry and transport. It is projects and partnerships like this which will help bring those innovations to life and show the art of the possible.”

Henrik Pedersen, Chief Executive Officer, Associated British Ports, said: “ABP is proud that the Humber ports are already playing a significant role in the decarbonisation of industry, within and beyond the Humber region. This exciting project offers the Port of Immingham the opportunity to create a model for ports across the UK- and the world - to replicate, making the most of the decarbonisation potential of hydrogen.”

Tsuyoshi Iwata, Deputy Managing Director, Toyota Tsusho U.K. Limited, said: “We are very pleased and excited to be a part of this project at the Port of Immingham, as we believe Hydrogen has an important role in the UK’s target to be carbon neutral by 2050. Together with our partners, Toyota Tsusho is committed to this project with our experience and expertise in the use of hydrogen fuel cells to power port machinery as well as other mobility fields.”

Uniper is an international energy company with around 12,000 employees in more than 40 countries. The company plans to make its power generation CO2-neutral in Europe by 2035. With about 35 GW of installed generation capacity, Uniper is among the largest global power generators. Its main activities include power generation in Europe and Russia as well as global energy trading, including a diversified gas portfolio that makes Uniper one of Europe’s leading gas companies. In 2020, Uniper had a gas turnover of more than 220 bcm. Uniper is also a reliable partner for municipalities, public utilities, and industrial companies for developing and implementing innovative, CO2-reducing solutions on their way to decarbonizing their activities. As a pioneer in the field of hydrogen, Uniper is active worldwide along the entire value chain and is implementing projects to make hydrogen usable as a mainstay of energy supply.

The company is headquartered in Düsseldorf and currently the third-largest listed German utility. Together with its main shareholder Fortum, Uniper is also the third-largest producer of CO2-free energy in Europe.

In the UK, Uniper operates a flexible generation portfolio of seven power stations, and a fast-cycle gas storage facility. A broad range of commercial activities are offered through the Engineering Services division, while the Uniper Engineering Academy delivers high-quality technical training and government-accredited apprenticeship programmes for the utility, manufacturing and heavy industry sectors.

Siemens Energy is one of the world’s leading energy technology companies. The company works with its customers and partners on energy systems for the future, thus supporting the transition to a more sustainable world. With its portfolio of products, solutions and services, Siemens Energy covers almost the entire energy value chain – from power generation and transmission to storage. The portfolio includes conventional and renewable energy technology, such as gas and steam turbines, hybrid power plants operated with hydrogen, and power generators and transformers. More than 50 percent of the portfolio has already been decarbonized. A majority stake in the listed company Siemens Gamesa Renewable Energy (SGRE) makes Siemens Energy a global market leader for renewable energies. An estimated one-sixth of the electricity generated worldwide is based on technologies from Siemens Energy. Siemens Energy employs more than 90,000 people worldwide in more than 90 countries and generated revenue of around €27.5 billion in fiscal year 2020.

Siemens Energy is a registered trademark licensed by Siemens AG.

Associated British Ports (ABP) is the UK’s leading ports group, with 21 ports around the UK and Hams Hall Rail Freight Terminal handling around a quarter of the nation’s seaborne trade. ABP operates four ports on the Humber, which together constitute the UK’s largest ports complex by tonnage, and the Port of Southampton, the UK’s number one export port. By facilitating trade and connecting British businesses and manufacturers to global markets, our ports act as important drivers of economic growth in regions around the country. Together with our customers, our ports support 119,000 jobs and contribute £7.5 billion to the UK economy. ABP has the scale, strategic position and expertise to support our customers in building resilient and sustainable supply chains, while enabling the continued growth of the renewable energy sector and industrial decarbonisation. Along with Uniper and ten other industrial partners, ABP is a part of Zero Carbon Humber, a group which aims to deliver the UK’s first zero carbon industrial cluster. ABP’s experience in delivering ambitious projects to support the growth of the renewable energy sector is exemplified by the group’s successful partnership with Siemens Gamesa on the pioneering £310 million Green Port Hull development.

Toyota Tsusho Corporation was founded in 1948 as the trading company for the Toyota Group. Today, Toyota Tsusho operates in more than 120 countries with approximately 66,000 Group employees, are all striving to contribute to the creation of prosperous societies. Toyota Tsusho continues to expand as a global leader in vehicle exports and automobile production support. The company has seven operating divisions (Metals/ Global Parts & Logistics/ Automotive/ Machinery, Energy & Project/ Chemicals & Electronics/ Food & Consumer Services/ Africa) focused around three business fields. These are the Mobility field, which contributes to future convenient societies, the Resources & Environment field, which ensures sustainable societies, and the Life & Community field, which supports comfortable and healthy lifestyles.